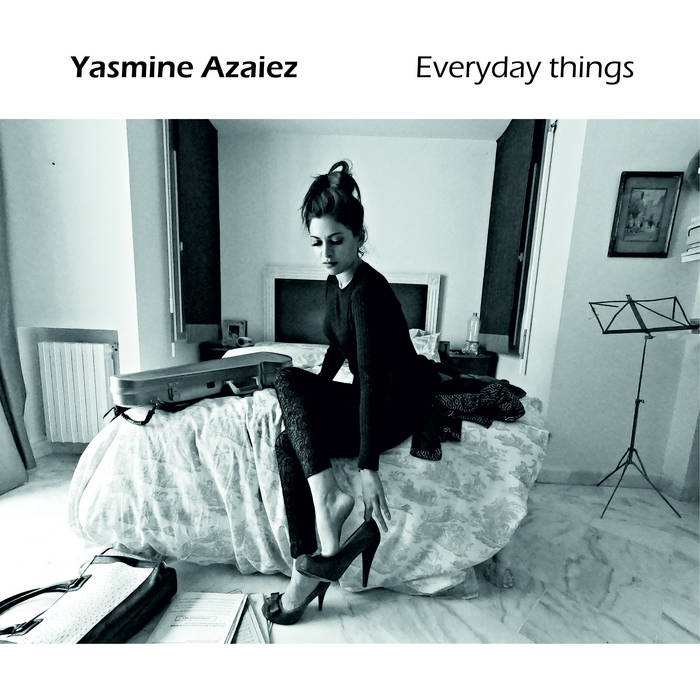 
For some, the image on the cover of this CD might be confusing. If they are experienced listeners of Free Music they might not expect to see a photo of a young woman with a pair of high fashion heels. They might wonder what that image has to do with the history of Free Music, or the implied culture of music that is made mostly with improvisation. But I, as someone who knows Yasmine Azaiez well and has known her for over 10 years, see that beautiful photo as an honest declaration of her independence, her artistry, her strength, and her determination to show who she is—in the exact same way that we might see Miles Davis, Evan Parker, Mary Halvorson, or Peter Evans on a CD cover. Like them, she has her own unique voice, nurtured through years of study, performance, and a constant aesthetic assessment of the what, why, and how, to express who she truly is with her music.

Yasmine Azaiez is a brilliant and original contemporary free music musician. She is a complex, and transformative virtuoso of the violin, of composition, of repertoire, and, most notably here, of improvisation. Her pedigree is confirmed by the 10 years of her life spent as a student at the Yehudi Menuhin School in London studying classical violin, and six years studying improvisation at New England Conservatory in Boston, which is where I met her. It’s where she performed music of nearly every tradition that employs improvisation including Jazz with “changes” and the music of Ornette Coleman, Albert Ayler, Anthony Braxton, Cecil Taylor, Derek Bailey, and Evan Parker.

The first time I heard Yasmine play I knew there was something special going on. In addition to being obviously skilled, she had a soulfulness and daring that are rare among conservatory students. When I asked her about that, her response was, “I’m an Arab!” She is indeed, from Tunis, Tunisia, where she currently resides and where she is a multi-faceted celebrity. She’s been a film actress and model, she runs a violin school for kids and a dog rescue organization, and she performs with her groups that feature her compositions combining jazz with Arabic music. Her newest version of this work mixes Tunisian and Malian music as a statement against racism in Tunisia.

Her complexity can be heard instantly on this recording in the cycles of sounds, the artfully mixed durations of pitches, harmonics, and non-voiced sounds, and in the consistent variation in density and color that combine to make music that is hypnotic and evocative, but is also unencumbered by any weighty obligation to history, tradition, or academic pretense. This music is an original, sincere, and uniquely personal extension of the contemporary explorations of violin in composed music, where sound and timbre are meant to exist within the perfect silence; as well as one of North and West African music, where a cry, a wail, a call, a dervish, and centuries of rhythmic cycles are all expressed on fiddles; and of course of Free Music, where the synthesis of disparate materials that are altered through an individual artist’s interpretation result in the repurposing of existing sounds and the invention of new technique for the instrument they are played on.

A few points that illustrate the work and legitimacy of Yasmine’s solo music, and for me set it apart: I was there when Yasmine performed her transcriptions of a Cecil Taylor piano improvisation and an Evan Parker saxophone solo on violin; I was there when Evan Parker asked her how she managed to put his music on her instrument, to which she responded, “I listened and wrote down what I heard;” and I have played with Yasmine on many occasions in Boston, New York, as well as in Paris, and Amsterdam. She is on my recording Ultra (Fundacja Sluchaj 2017). I know of the depth of her understanding of spontaneously configured form, her tremendous accuracy as a listener/player, her ability to impose her musical will on the violin—to make it do what the situation demands—and of her determination to transform that instrument so that it displays who she is by making new sounds on it, and thereby creating new musical experiences using improvisation. Her playing on this recording proves all of that again. The sequences here demand a rapid response time, and that can only be dealt with using a masterful control of her bow in combination with an instantaneous assessment of the resulting formal potential. After all, this is improvised music.

The cycles in Taylor’s and Parker’s music clearly have had an impact on Yasmine, but there is more to it than that. She has deep respect for them and for other versions of real art, real music, for the highest ethical examples of these things. She respects the work and innovations of those who have created the thing we know as Free Music (or free improvisation, free jazz, improvised music, creative music). She knows that they and it exist to express the right things. She has been drawn to Free Music because it enables her to be herself—a complex person, a serious person, a virtuoso, an empathic human being. And, as the cover photo shows, she is someone with a much stronger sense of style than most of us.

Yasmine is one of the now many women who are charting the course of Free Music, which will be better because it will reflect society more accurately and equally and will push the music—and its value—to daring and meaningful new places.

Bandcamp Daily  your guide to the world of Bandcamp

Cannibal Corpse's George "Corpsegrinder" Fisher stops by for an interview